What is the NSP?

The Boston Mills / Brandywine / Alpine Valley Ski Patrol is made up of over 275 trained volunteers making it the largest area patrol in the entire National Ski Patrol network.  As you can see, the size of the area doesn’t necessarily dictate the size of the patrol. Our membership is 100% volunteer and we train and work hard to be the best. In fact, our patrol was awarded the National Outstanding Large Alpine Patrol multiple times, most recently for 2018!

We are extremely proud to be recognized as one of the best in such an outstanding organization as the National Ski Patrol. 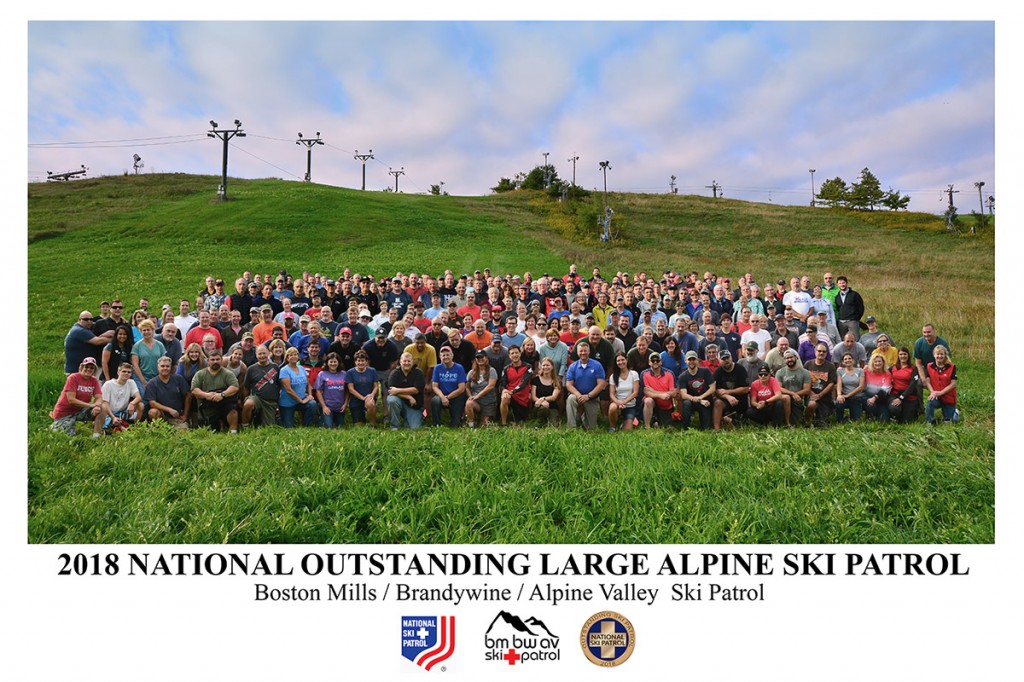 The Role of the National Ski Patrol

The National Ski Patrol (NSP), founded in 1938, has followed its creed of “Service and Safety” since the establishment of skiing as a popular sport in the United States. As snow sports and guest services at areas have evolved over the years, so has the NSP, from a service organization to a modern-day professional education association. Other snow sports such as snowboarding, tubing, and snow-skating introduced new equipment and new terrain, which in turn required developing and teaching new safety and emergency care training methods. Increased access to the backcountry beyond ski area boundaries, has also meant new training regimens for member of the NSP.

Today, the organization is composed of more than 26,000 members serving over 600 patrols. These individuals include alpine, Nordic and auxiliary patrollers who are paid or who volunteer their time throughout the United States and at certain military areas in Europe. The organization’s members are engaged in the promotion of safety programs throughout the outdoor recreation community. NSP members work on behalf of local ski and snowboard areas to improve the overall snow sports experience for outdoor recreationists. The National Ski Patrol has worked closely with other countries in outdoor emergency care education, and has assisted in establishing patrol associations in Canada, Korea, New Zealand, Israel, Turkey, Argentina, and Chile, as well as the Victorian Rescue Service in Australia.

The National Ski Patrol is a nonprofit organization, deriving its primary financial support from membership dues, donations, user fees, and corporate sponsorships. The national office is located in Lakewood, Colo., and is staffed with full-time employees that handle administrative duties.

Origins of the National Ski Patrol

The NSP was organized and directed by Charles Minot “Minnie” Dole as a committee of the National Ski Association (now the United States Ski Association). Through his efforts as the first national director of the NSP, the organization spread its effects and esprit de corps across the nation. Upon his retirement in 1950, Dole had built the NSP into an organization of 4,000 members serving 300 ski patrols. During World War II, Dole was responsible for the establishment of the famed 10th Mountain Division of the U.S. Army. Applicants for this remarkable military unit, which saw much of its fighting activity in Italy, were screened by the NSP. Many individuals who were responsible for the establishment of ski areas in the United States served in the 10th Mountain Division and contributed significantly to the sport.

Thanks to this distinguished legacy of altruistic service, the National Ski Patrol was recognized with a federal charter by the United States Congress in 1980. This is a coveted endorsement that only a few other American institutions have earned, including the American Red Cross, the YMCA, and the Boy Scouts. The federal charter stipulates that the NSP shall continue to promote safety and health in skiing and other outdoor winter recreational activities. Accordingly, the NSP annually reports directly to Congress.